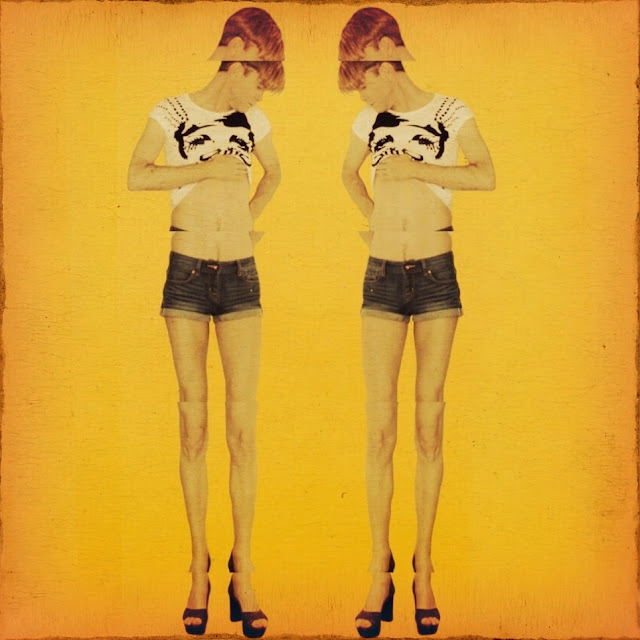 Who are we really? Are we who we believe ourselves to be, or are we who we are told that we are? Most of us are born and raised with identities that are projected on to us from outside. Others tell us who we are, family, friends, school. They give us a name, a gender, an identity. We build on that through childhood and adolescence, so that in adulthood we believe that we are who we are because that is a truth, a reality, a fixed point in space and time, but is it?

In an increasingly multiple world, one where the old simplistic binary system of black/white, on/off, positive/negative, has been shown to be woefully inadequate, we see a different world opening up. One with sliding scales of existence, interpretations of being. One where gender is multiplied so that a whole range of genders, seemingly infinite, can be appropriated by the individual, not just for a lifetime, but for segments of a lifetime, and in many ways that is the key to the contemporary themes of gender and identity, the individual. 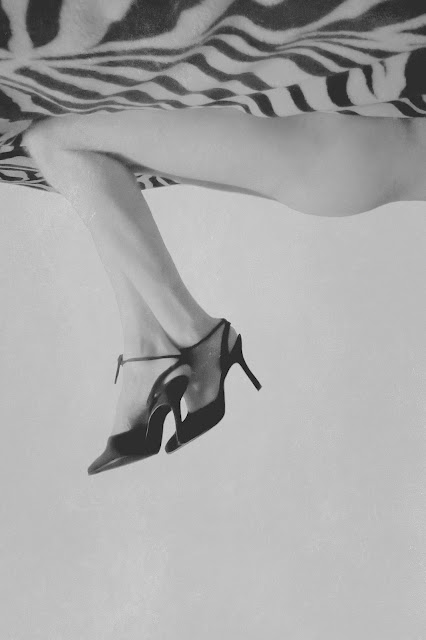 The French artist, actor, photographer and performer Emmanuel Barrouyer addresses these contemporary issues of gender and identity, in his work. He most often uses himself in various staged self portraits, where it appears as if he is himself, but the ambiguity of self and identity are always close by, so that portraits of Emmanuel are often not portraits at all.

Emanuel's artwork dealing with gender and identity started off in 2013 when he began to impersonate female friends, as in the pieces As Julie, and Boys Legs. This gave him the impetus to start exploring who we are, and more importantly, who others see us as. How do others identify us? Is it real, or is it delusional. Does it help liberate us, or does it increasingly imprison us? 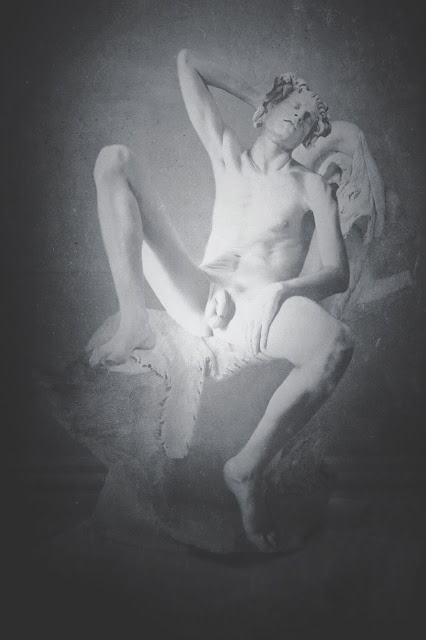 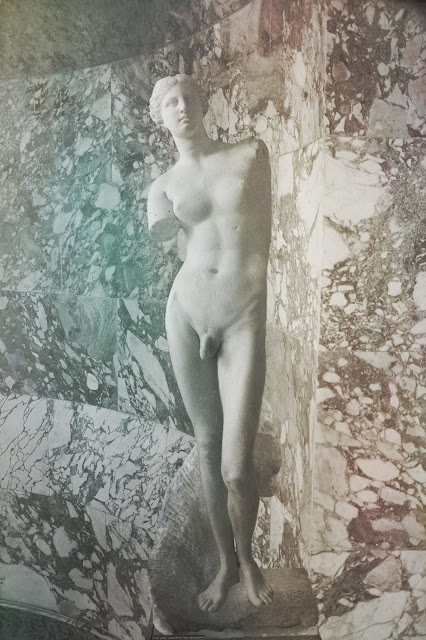 In his Statued series of 2016, Emmanuel digitally encased himself within classical sculpture, playing with nudity of flesh and stone, sliding scales of interpretation and understanding. Was he producing self portraits of flesh or stone, statued men, or embodied statues?

In his 2015 series U'ReInALonelySituation, Emmanuel explored desire and identity by connecting bathroom graffiti with classical sculpture. Another sliding scale of need and desire in the written scrawls on a bathroom wall, and the disconnected and remote signature of the classical statue. Desire sits within the genitals, just as it sits within the words on the bathroom wall. 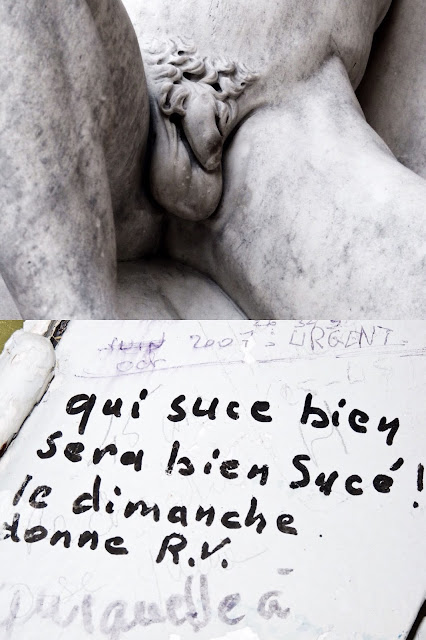 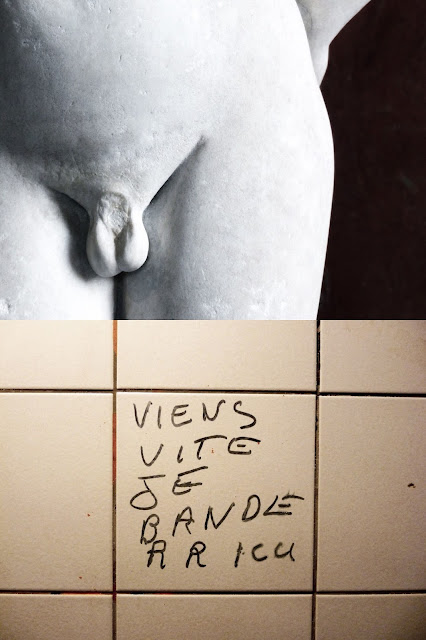 
In his Silencio series, which he first revealed on the Balaclava.Q site this year, he has returned to the primal question of identity. Who am I? Why am I? Where am I? What am I? Many of us constantly ask ourselves these questions, and to be fair, many of us don't. Who we are to ourselves and who we are to others, sometimes these identities, sometimes they don't. It very often depends on how honest we want to be with ourselves, and here lies the strength of Emmanuels work. Honesty.

Emmanuel is an artist who wants to know. He doesn't play with gender and identity in order to shock, in order to offend, in order to make a name for himself. He genuinely wants to know who he is, whether he is the amalgamation of the beliefs of others, or if there is something at the core of self that is intrinsically him, and intrinsically knows that it is him, no matter what might be added or subtracted later through the journey of life, and that is something we all want and need to know. 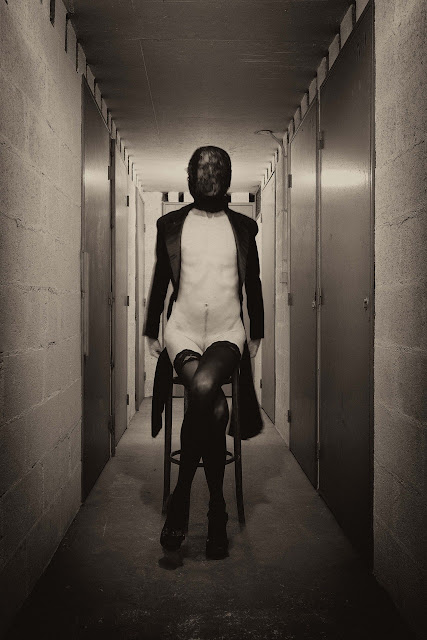 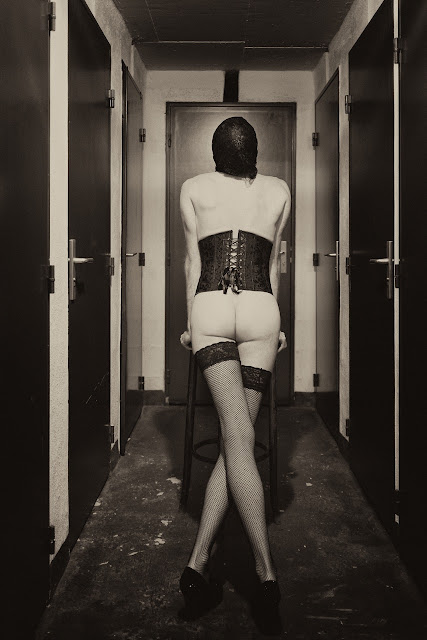 
As an addition, Emmanuel has produced a series of work that was in reaction to the death of David Bowie at the beginning of this year, the series is entitled The Man Who Fell To Earth. The two pieces shown here: Diving, and Visitation from that series, are Emmanuels own tribute and have no direct connection to the movie The Man Who Fell To Earth, or indeed of David Bowie himself.. 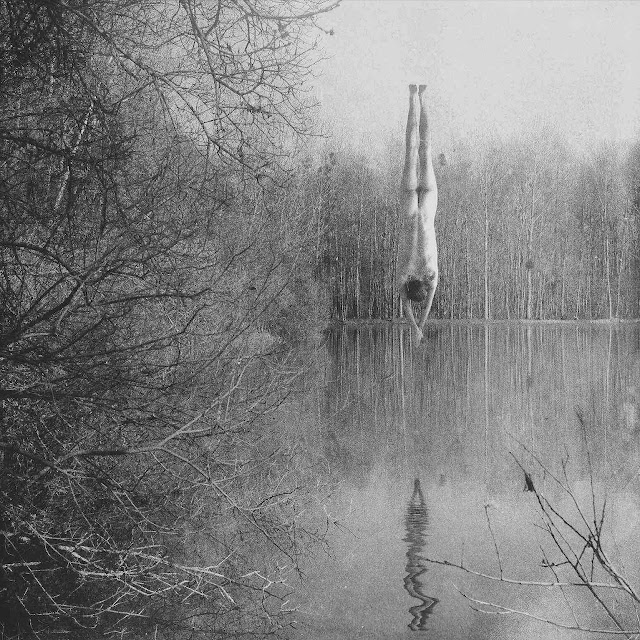 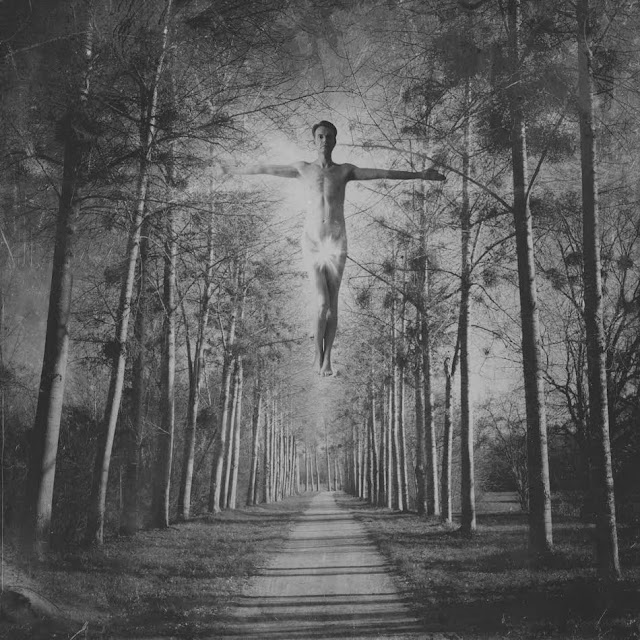 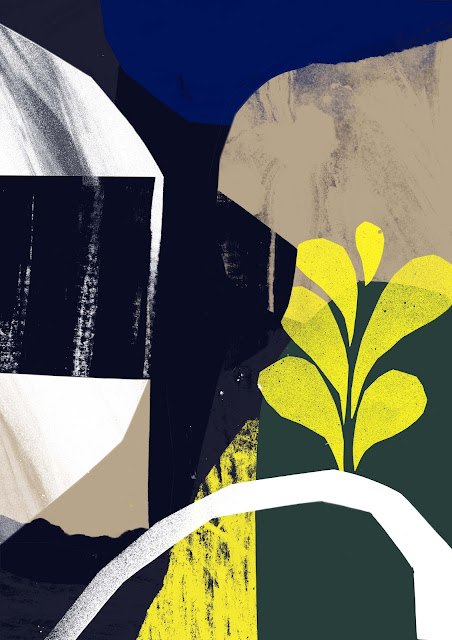 Tom Abbiss Smith: Shade It is always wonderful to experience an artist launching themselves upon the world, always great to see artists that have the confidence, the positivity, the understanding that is so needed in our contemporary era, and so lacking by so many. In many ways, it is what the arts are for, they feed us the fuel in which to carry on. Work that is bold, strident, confident, has a way of reflecting back on the viewer, and can give us at least elements of those themes, and for that we should be thankful and grateful. It's not always easy maintaining that level of confidence and positivity. Tom Abbiss Smith: Blueberry Seed Tom Abbiss Smith: Conceal Recent graduate from Norwich University of the Arts, Tom Abbiss Smith has that confidence, positivity, and understanding.  His intuitive style of image making frequently manipulates mark making and texture in conjunction with colour and composition within his work. Tom's attention to form and 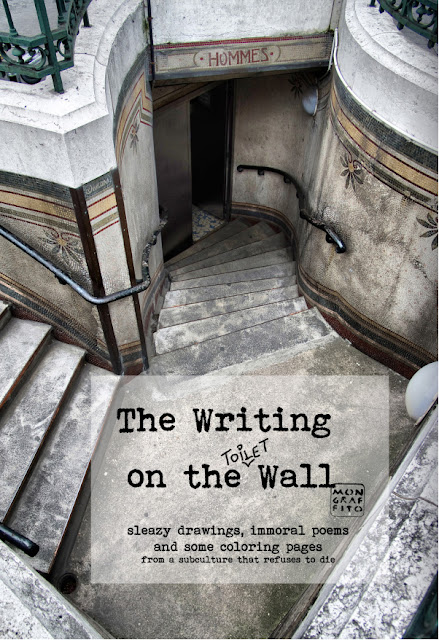 BOOK REVIEW: The Writing On The (Toilet) Wall by Mon Graffito

Vulgarity, what does it mean? Wikipedia denotes vulgar as common, coarse, unrefined. So who makes those decisions? Who is it that decides what is vulgar, what can be vulgar, and what can be excluded as vulgar? Vulgarity is so often a personal perception, though it can also be a communal, even national one.  As far as creativity is concerned, vulgarity is an unfocused area, one that often shifts and meanders depending on the artist and their perspective. Some artists use common perceptions of vulgarity in order to emphasise a point, others to underline an assumption, others still, use vulgarity to set a scene, and yet others embrace vulgarity as a necessity, an integral part of the human condition. That is the space that Mon Graffito takes up in his latest book The Writing On The (Toilet) Wall. We are all flesh and blood, we are all physical in our make up, our character, our essence. To pretend otherwise is delusional at best, dysfunctional at worst. Our needs, our urge 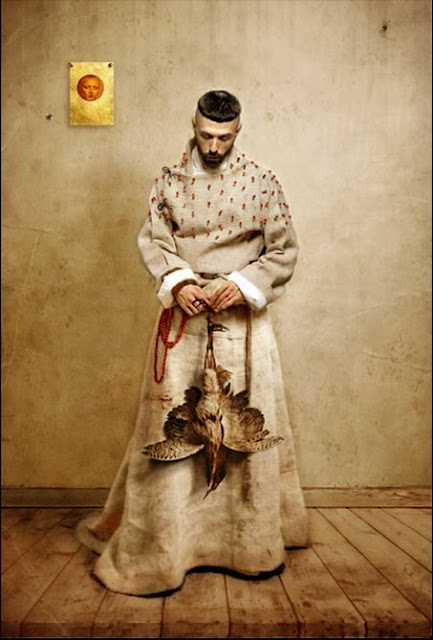 Hector de Gregorio: Prayer 1 Art can be said to imitate life, life can be said to imitate art, and often art can imitate art. We live in a world where contemporary artists convey an infinite variety of perspectives and understandings, and in an infinite variety of forms. What they all have in common is that they project the story of self. Doesn't matter how far removed it may initially appear, how abstract, how tangential, how dramatic, or how quiet, it is all about the human journey that each of us are on. The work of the London-based artist Hector de Gregorio is dramatic, theatrical, luscious, allegorical. In his own phraseology he terms it as "Static Cinema" and at least at first glance it does appear remarkably so. It is like taking in a grand costume drama, a late medieval/early renaissance theatrical story, full of twists and turns, vendettas and tragedies. But there is much more going on here than nice costumes and theatrical poses. Hector de Gregor